How To Bring Balance in Your Designs Using The Golden Ratio: A Beginner’s Guide Design is something that has been debated since humans began creating. Every person contributes their viewpoint to the endless discussion on forums, social media, and in-person gatherings about the traits of great design.

The Golden Ratio is one technique that enables us to create amazing designs over and over again with ease, even though there will never be a one-size-fits-all approach to UI design.

The Golden Ratio is a mathematical ratio that appears almost everywhere, such as in nature, architecture, and painting. When used in design specifically, it creates a composition that is organic, balanced, and appealing to the eye. In this article, we’ll explore the underlying principles of this technique and how it can be applied to UI design.

What is the Golden Ratio?

Golden ratios are the ratios used to divide two quantities so that their sums are the same as each other’s sums. The golden ratio is also called the golden proportion, or the divine proportion. Phi, also known as 1.618, corresponds to that number. Fibonacci Sequences were used by the Greeks to develop visual patterns to aid their designs. You can create a spiral (called the Golden Spiral) by placing squares side-by-side to form rectangles.

Do not be intimidated by a few equations! It is a much simpler concept than it appears. You can find it almost anywhere. It’s everything from hurricanes to coral, galaxies to shells… and those weird mutant cauliflowers you see sometimes when you go to the grocery store.

Balancing your Designs with the Golden Ratio

The golden ratio isn’t just a mathematical formula, but it is a spiral shape that can be applied to your UI design with ease if you learn how to use it. An eye will naturally flow through the image if a point of interest is placed on the smallest part of the spiral.

The Golden Ratio can be used in several ways in UI design:

Always consider the messaging hierarchy in your layout when creating any design that contains the text. Use the Golden Ratio to create a typographic scale to guide your typography sizes, whether it’s for a poster, an invitation, or a website. Identifying where to cut out white space in images is easy when cropping them. However, how do you ensure the image remains balanced after it has been resized? As a guide for composition, you can use the Golden Spiral.

You can ensure that the focal point is in the middle of the spiral, for instance, when overlaying the Golden Spiral on an image. 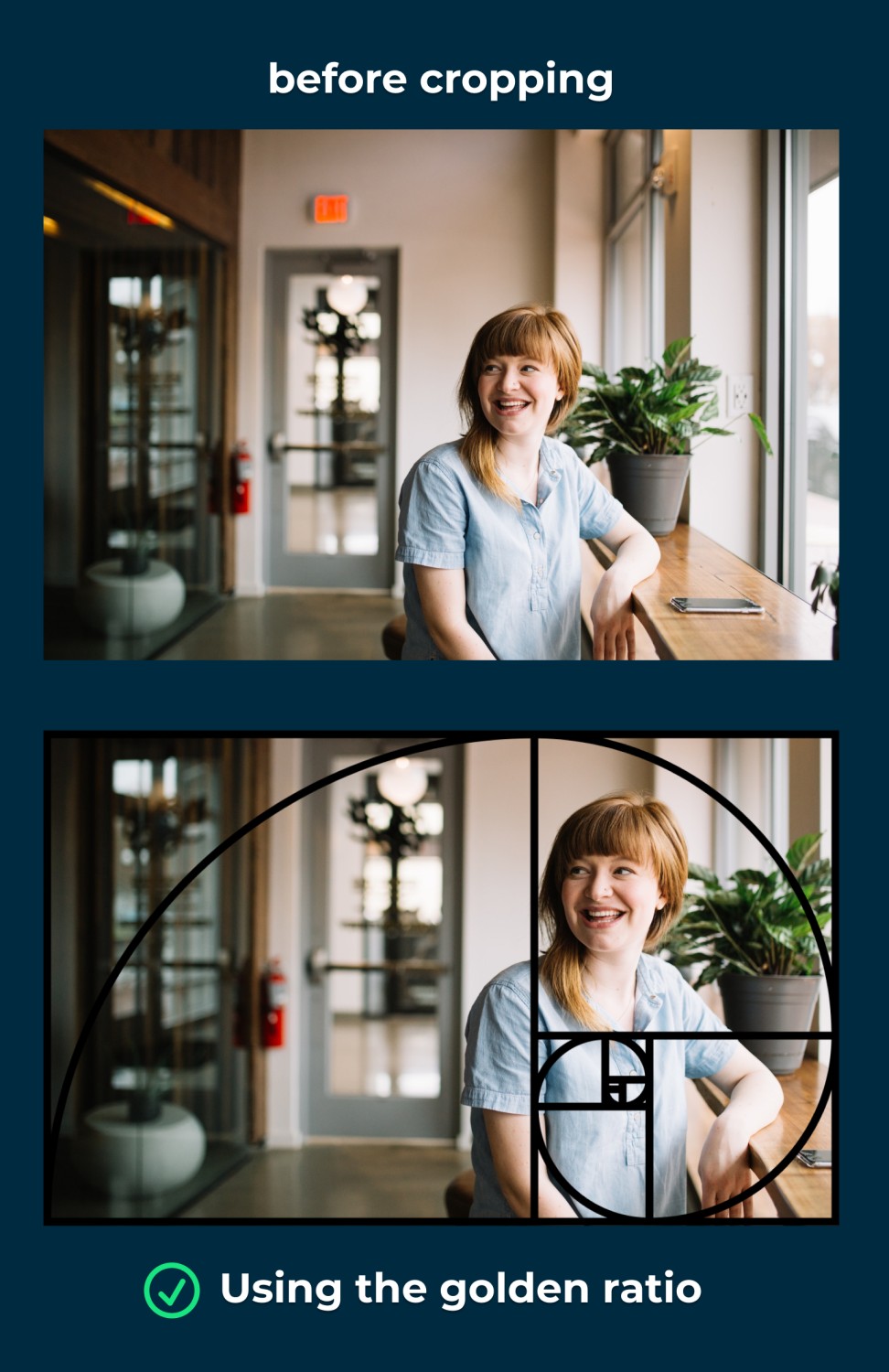 You need a well-crafted logo that communicates your brand’s core message at a glance so people know what you stand for. The Golden Ratio is an excellent way to draw people in when designing a logo to help them instantly connect. Pepsi, Apple, and Twitter to name a few, use the Golden Ratio in their logos. Positive or negative space, spacing is an essential aspect of any UI design, and it can often be the difference between success and failure.

It can be time-consuming to determine the spacing between elements; instead, you can follow the Golden Ratio diagram and place each element using the squares.

Then, your spacing and proportions will be calculated, rather than instinctive, as even a minor adjustment can help you achieve the Golden Ratio.

There may be a question as to whether mathematical calculations are worth the time and effort. So, let’s look at how golden ratios can contribute to UI design.

Many times, designers are faced with the problem of creating a product that must contain a great deal of content and all of its parts are integral and cannot be replaced. A harmonious composition can be achieved by applying the golden ratio.

Put the content in the different sectors based on their importance and use the 1:1.618 proportion to divide the layout into sections. Content composed in this manner is sufficient to satisfy users’ perceptions and helps to organize all of its components.

Visual hierarchy is an important aspect of content organization. Using principles of both techniques designers can maximize the likelihood of creating powerful compositions.

Designers must divide copy content into multiple levels to create efficient typography. The copy usually includes headers, subheadings, body copy, captions, and so on. A professional can quickly determine an appropriate proportion between typographic levels using the golden ratio.

To understand if they like a product, users scan the user interface for the first time. A visceral reaction is a psychological principle that explains why people make instant judgments about things within a few seconds of seeing them.

Golden ratio-created designs have a positive impact on users’ minds and their visual perception, and they become visible at first glance.

White space defines the space between design elements. White space in the UI should be carefully considered since the unity of composition depends heavily on it.

By using the golden ratio, spacing can be easily accomplished. When you define the right white space for a design, you will be able to utilize golden proportions.

From a mathematical standpoint, the golden ratio is the closest you can come to the perfection of proportions and balancing your UI design due to its inherently subjective nature and its living proof, that “beauty is in the eye of the beholder.”

If you want to learn more about UI/UX design, and creating harmonious designs, you may want to consider incorporating the golden ratio into your designs. You don’t need to do so in every UI design, but it might be something to consider.

Did you find this information helpful? Are you giving the golden ratio a try? Please let me know your thoughts in the comments below. Also, please give this article a thumbs up to support more content like this.

You can also follow me here on Linkedin, I love meeting new people. Say hi! Also, by doing that, you will receive notifications every time I post new content. ARIA Landmark Roles: The Best Way To Make Your HTML Feature-Rich and A... How Using Semantic HTML Will Make Your Website More Accessible Don’t Get Scammed: Why You Should Avoid Quick-fix Overlays For W... Writing for Web Accessibility: Learn How to Create Engaging Accessible...

Get in touch.
Schedule a zoom discovery call so I can learn about you and your goals. Friendly chat, no obligation👋